Josh Lyman: I'm just sayin' if you were in an accident, I wouldn't stop for a beer.

Donna Moss: If you were in an accident, I wouldn't stop for red lights. 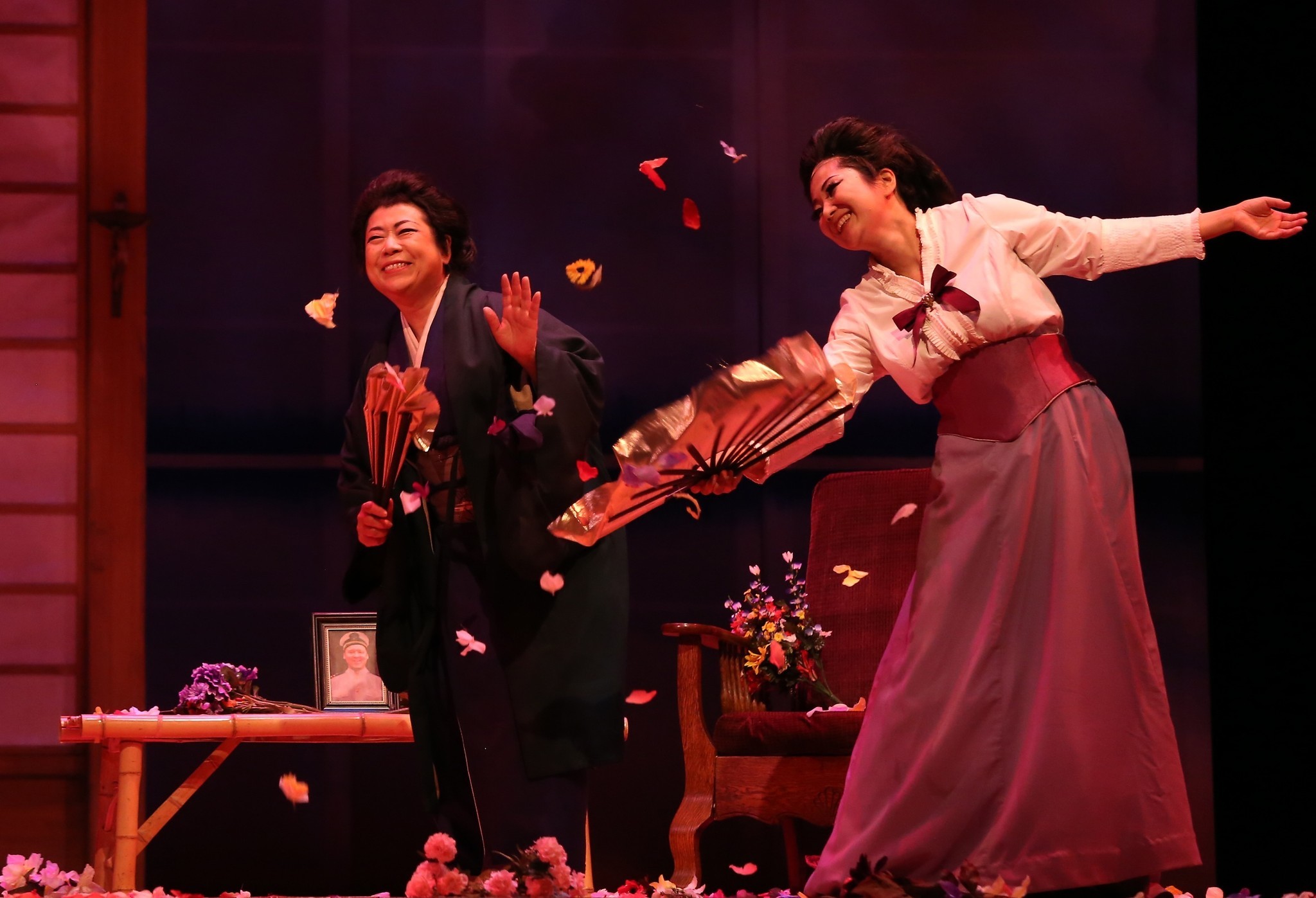 Last weekend, the Lyric Opera House here in Baltimore staged a production of the opera Madama Butterfly, by Giacomo Puccini. Students from our school were invited to attend one of the dress rehearsals on Wednesday, so I decided to go, taking Wee One with me since they had the space and I knew that she’d be interested.

Despite it being a dress rehearsal, the streets surrounding the Lyric were pretty full, so we had to park in a nearby garage. Naturally, the garage was charging the “event” rate rather than the hourly rate, and they were cash-only, but they were happy to hold onto my ID (and my car, of course) until I went to an ATM and came back with the money.

So the show itself was pretty cool. Instead of taking the assigned seats that were set up high enough for us to pack oxygen tanks. we opted to grab some vacant seats on one of the side balconies. We had a great view of the actors and the pit orchestra, which was (naturally) more casually dressed than one would usually see. This also put us in the position of being able to show the students the monitors mounted just below the balcony to each side of the stage, so the actors could see the conductor no matter which way they were facing. The students ran at about a 50% rate with regard to whether, in the end, the whole experience was interesting, but I look at it as an “exposure” type of event. In the end I think maybe we could have prepared them just a little bit better for the whole thing.

Wee One, on the other hand, had apparently taken some initiative and looked up the story on her own, so she had a better idea of what was going on. And, of course, she was all kinds of impressed with the actors, what with all the breath control and other dynamics. So after the show, while I circled the block looking for the ATM, we bumped into a couple of the actors and she got the opportunity to go all Fangirl over them.

In the car and on the way home. We’re headed north on Harford Road when we approach 25th Street, which is a busy intersection for that road. As it happens, we have the green light as we approach the intersection, but I also see a police cruiser coming into the intersection, with lights on and siren wailing. I braked hard, hard enough that you could feel the antilock brakes do that shuddering thing, but we stopped partway into the crosswalk.

The bad news is, the car behind us didn’t get the memo. We were stopped for a good second or so when suddenly: BANG. And now we’re all the way into the crosswalk. We’d been rear-ended.

It’s kind of weird when you get into this sort of accident, being hit from behind. You really need a moment to comprehend what’s happened. Wee One even asked me, “What happened?” and I told her that someone had hit us. I asked her if she was OK and she said she was. I told her to stay in the car and got out.

When these things happen, you also have a moment of thinking, “This isn’t going to be so bad.” Then you look at the car and you say something like “Jesus H. Christ on a Pogo Stick! Look at THAT mess!” I got out of the car and the other driver, a young lady about 25 years old, was already out of her car. She was apologetic and said that she’d hydroplaned (it was raining) and couldn’t stop her Jeep Liberty. By definition, “hydroplaning” is not what was going on here, but whatever. My car was clearly a mess and it was clearly her fault. I called 911 and they told me they’d dispatch an officer.

I got back into the car to start fishing the insurance and registration information out of the glove box. When I got out again, the officer had just arrived. Efficient! I greeted him with a cheerful “Whassup!” In retrospect, it’s kind of amazing that he didn’t ask me to blow up a balloon right there. He started asking us about what had happened, and actually seemed kind of surprised that the other cruiser—the one I’d stopped for with the lights and the siren—hadn’t stopped what they were doing and turned their attention to us. Meanwhile, there were two people on the corner, who had been waiting for a bus, and offering to testify on my behalf. “Do you got a baby in that car? I seen everything! She was tailgating you, she was going too fast.” I let the officer know that we had some witnesses, but he didn’t really care since the girl had already admitted it was all on her. After a few minutes he concluded that there really wasn’t any point in leaving the cars where they were in the middle of Harford Road, and we moved the vehicles over into the parking lot of the check-cashing place on the southeast corner. I had to make two trips, since my bumper was in the middle of the road. So one was on foot, moving the bumper, and the other was moving the car itself. Miraculously, the car was capable of moving on its own.

So while I’m in the parking lot and awaiting the paperwork, I called Wife and told her to come get the Wee One. She showed up and was suitably impressed by the damage to my car. She told me she’d take Wee One home and then come back for me, since I was still waiting for the policeman’s paperwork.

By the time she got back to the house, Wee One started complaining that her head hurt, and it was possible that she’d hit her head against the door when we were hit. Wife wanted to take her to the hospital after getting me home. I told her that I was starting to feel it too, and maybe we’d both go get looked at. When she got back to me, the police had left, the other driver had left (her car had remarkably little damage, and I’m dumbfounded that her air bags didn’t deploy. By now I’d also taken the bumper and put it into the car, in the fully-reclined passenger seat. Wife wanted me to have the car towed; I knew that it was actually drive-able (if not totally aesthetic) and she should just follow me in case it turns out not to be able to make it all the way home.

We did manage to make it home, and off we went to GBMC, where we were poked and X-Rayed and such, and both given clean bills of health and a few pain pills. Wee One’s headaches persisted for another few days but further testing showed no permanent damage. We got home around 4AM and fell directly into bed. I don’t often fall asleep that quickly.

The next day, I spent on the phone fielding phone calls to and from the insurance companies. Let me tell you something: insurance companies get a bad rap, and I’m sure some of it is deserved, but the folks I dealt with at both companies were all GREAT. Everything moved efficiently, and when I told them that they needed me to walk through the mechanics of some of the procedures, they were kind enough to simplify it for me. The biggest delays came from the fact that there was a National Holiday in the middle of all this, which delayed some of the mail involved, but that was it: the time from accident, to inspection, to the car being declared a total loss, to receiving my check was two weeks flat.

So here’s the rundown on the damage: both quarter panels were crushed. Both light assemblies had damage to them; in fact Wife told me that I had working tail lights, but the brake lights didn’t come on when I stepped on the pedal. The third, center brake light came on but you can’t see it anymore because the trunk lid is crunched upward. That trunk lid, incidentally, was there to stay. It’s moving neither up nor down from the position you see here. The bumper was knocked off (you can kind of see it through the window, to the right), and the whole assembly behind the bumper was bent downward. The rear window was smashed completely. Some of the contents of the trunk were pinched in between the floor of the trunk and the lid. In order to get what stuff I could out of the trunk, I had to flip down the back seat and reach through.

Oh, here’s a saving grace: when the car was struck, it had very little fuel left in the tank; I was going to stop and put gas in the car before I got home.

So it’s a couple of years earlier than I expected, but I now have a new (to me) car in the form of a 2013 Hyundai Sentra Hybrid. I’m still getting used to it, of course, but I’m rather liking this car. And in the meantime, it’s Goodbye, Old Paint.