Maggie O'Keefe: Command of trivia is one of the things that attracted me to Cliff. That and his manners.

Holy cats! It’s time once again for Mister Answer Guy, who takes the hardest of questions and provides answers that sound almost like he knows what he might be talking about. Let’s dive into the mailbag. 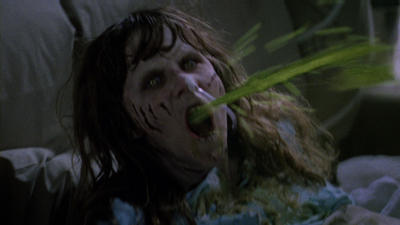 Q: Every time I’m about to vomit, I start to drool, a LOT. What’s that about? I’m pretty sure I’m not salivating because I’m thinking about all the food I’m about to see. So what’s the deal?

A: Really? We’re going to start with this? Okay. Vomiting isn’t the most pleasant thing in the world, but it does have a purpose. Usually the most immediate point of it is to force suspected toxins out of your body, whether it’s bad food or too much alcohol, or perhaps you just realized you’ve paid perfectly good money to see a movie with Kristen Stewart in it. Another reason is that you may have a foreign object in your esophagus, so maybe giving it the old Hydraulic Boost will set it free. The problem is, the contents of your stomach are highly acidic, enough to do some damage to your esophagus, your mouth and the enamel on your teeth. So when you’re about to boot, you start producing a lot of saliva, which is weakly basic (as in “opposite of acidic”) and can help dilute and neutralize some of that acidy badness.

But check this out: I have kind of a weak gag reflex, but I’m pretty diligent about my oral hygiene. So I brush my teeth regularly but I also brush my tongue, the way I’m recommended to by my dentist. Once in awhile I brush my tongue a little too vigorously, and I accidentally set off my gag reflex. I know it right away because, of course, I’ve suddenly got a mouthful of saliva. I find that I can actually prevent vomiting by not swallowing the saliva. I’ve done some research that says others do the same thing, with the same result. Some people spit it out into the sink or toilet; but I’ve found it easier to just breathe through my mouth and face downward over the sink, letting the saliva just drain out of my mouth. Before the feeling has passed, I’m usually drooling in a continuous stream for about a minute. Pleasant? Not really, but it beats vomiting, especially for no reason.

Q: We haven’t added any states to the Union since Alaska and Hawaii, back in 1959. Given that we added states all the time before that, why aren’t there any new ones?

A: It’s true, we’re in the longest statehood drought since the 37-year gap between Arizona (1912) and Alaska (1959). I’m pretty sure we had to add Hawaii because otherwise the flag would look really stupid with 49 stars on it. While I’m on that gap thing, do you realize that this makes Barack Obama the ONLY President of the United States for whom the number of states has never changed in his lifetime? It’s not significant, nor is it necessarily his fault, but I just thought that was kind of cool.

In that interim, though, there have been a few possibilities for 51st statehood. Perhaps the one that’s brought up most frequently is Puerto Rico, and as it turns out they’ve inched much closer to that condition in the last couple of years. In 2012 the Puerto Rican legislature resolved to request that Congress begin the process of admitting Puerto Rico as our next state.  A year later, funding was approved for the territory to hold a referendum. In the event of a positive outcome, the President would then have to draft legislation to have Puerto Rico admitted as a state. That money was approved in early 2014, but the funds don’t expire. Whether such a referendum is in the near future, I don’t know.

Once in awhile, Washington DC gets nominated as a possible statehood candidate, but that hasn’t been seriously considered in about thirty years. This sucks for the locals, because they’re essentially residents of no particular state, which explains the “Taxation Without Representation” license plates so many of the cars have. One suggestion has been that Maryland take back its portion of the city (Virginia already did this years ago), and leave only the National Mall, the White House and the Capitol as a much smaller District. This way the people who live in the city get the benefit of being state residents and a new state isn’t created.

There are a few other territories out there, such as the Virgin Islands, Samoa and Guam, but the discussion has never really gotten serious. The Philippines went through a movement to become a US State awhile back, but again there’s been no real activity in that area. Any other suggestions for statehood usually involve the division of existing states. For instance, New York could easily be broken into a lower state (New York City and Long Island) and an upper state (everything else). California and Texas are huge and could be broken up—in fact, when Texas was admitted into the Union, part of the deal was that that state could, if they so desired, break into five separate states. Western Maryland is politically quite different from the central part of the state.

However, the eastern portions of Maryland are quite similar to the western ones, politically. It’s about the only thing that keeps politics interesting around here. At any rate, while it comes up once in awhile it’s never a serious discussion.

Q: Got any more good stuff on Alaska?

Q: Is it true that women couldn’t show their belly buttons on TV in the 60s? A: Generally, yes. As scantily-clad as Barbara Eden was in I Dream of Jeannie, her costume was designed so that it wouldn’t show. There are a couple of occasions during the course of the program where her outfit would slip a little and let it show, and either nobody noticed or cared enough, but for the most part it didn’t happen. On Rowan and Martin’s Laugh-In, there were often shots of girls in bikinis dancing, but the body paint they wore usually provided camouflage.

NBC had some weird standards at that time. David Gerrold (the writer of “The Trouble With Tribbles” episode of Trek) once noted that when it came to women’s breasts, you could show pretty much everything as far as the top of the breast was concerned—except for the nipple, of course. However, showing the UNDERSIDE of the breasts was absolutely verboten. “Sideboob” wasn’t really a thing at that time, at least it didn’t have a name.

Incidentally, because of the belly-button rule, there was an episode of Star Trek where Mariette Hartley had to keep her belly button covered. A few years later, the standards had relaxed a little, and Gene Roddenberry the creator of that show, cast Hartley in his science fiction movie/TV pilot Genesis II. They needed an easy, but not always visible way to show that someone was a mutant, so they put a second belly button on the mutants. including Hartley. Roddenberry later joked that because NBC took away his ability to show her belly button on Star Trek, they owed him one.

Q: Why does marijuana give you the munchies?

A: Me? It doesn’t. It mostly gives me headaches. However, I do get the intent of the question. For a long time, nobody really knew. It was theorized that THC, the chemical in marijuana that gets you high, had a strong effect on your blood sugar, thus making you hungry. However, a lot of research (and presumably a LOT of joints) went into research that discovered that THC really doesn’t have much effect on blood sugar. So, the simplest explanation turned out to be the wrong one.

As it happens, some new research has just come out—as in, just this week. Your brain already produces some cannabinoids naturally, which repress the release of some neurotransmitters in the brain. Cannabinoids help to control emotions, memory, your sensitivity to pain, and (ah-HA!) your appetite. Because THC, as a cannabinoid, can fit into those same receptors in the brain, it basically alters your brain’s function dramatically.

Have you ever gone into a room that smells kind of weird, but after a little while you stop smelling it? It’s called olfactory fatigue, or olfactory habituation, and it’s your body’s response to a strong odor to prevent overloading of the nervous system. If olfactory fatigue didn’t happen, you might not smell something different when it happens. So imagine yourself, say, in the perfume department of your local Macy’s. If your body didn’t stop responding to the perfume, you might not notice that the sweaters in the next aisle have caught fire.

What THC does is to delay olfactory fatigue, allowing you to smell a food for much longer than you ordinarily would. So when you break into that bag of Doritos, your ability to smell those chips goes on for much longer than it would otherwise, which means that you respond to the smell for longer, and you, in turn, eat more of them. Science, boy.

Q: Last time you did this you talked about how popular your Hawaii Five-O post is. Is it still popular? Have any other posts proven to be especially popular?

A: In, fact, yes! For those who don’t remember, or aren’t inclined to click through, the Hawaii Five-O post was my deconstruction of the opening credits of the original program, which ran from 1968 until 1980 and barely changed in that entire time. I’d planned to do the same thing with the modern-day edition of the show, but while the basic structure never changes, the individual shots within that structure change every season. (I will point out that the zoom-in on Alex O’Loughlin is a direct homage to the one involving Jack Lord, even to the point of having O’Loughlin standing on the SAME hotel balcony.)

While the Hawaii Five-O post is still ridiculously popular and has even generated emails from people—the only post of mine to do so—there’s another post that rivals it in popularity. It’s a study of the phrase “Jockomo-feena-nay”, as in the phrase sung in the song “Iko Iko” and many others. I haven’t run the numbers specifically, but I’d be willing to bet that “Jockomo” has “Five-O” edged by just a little bit. According to StatCounter, the “Jockomo feena nay” post is the Number One result for several different search terms. “Hawaii Five-O” is more in the realm of 10th—14th, depending on the specific search term.

And that’s it for this time around! As usual, feel free to submit any questions you’d like me to research! Not that you will, but feel free!